Contengan Jalanan (Novel . Hlovate) and Me


Hlovate is popular and there are a lots of blogs sharing about his book too. It is worth to share, somehow. 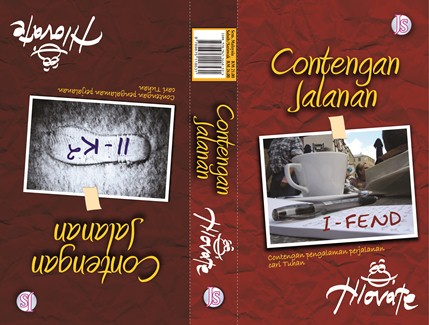 I am not a novel person, and I am not into much too find the new or popular novel in the markets.

The first time I ever saw this novel was during my reunion with my primary schoolmates (SK Bukit Changgang . 1991) back then in May 2011. My friend, Suhaila brought this novel to read while she having free time. I was attracted to the cover of this novel that is upside down at the back. It looks weird but unique somehow. Back then I never know that Hlovate is popular but the title "Contengan Jalanan" is interesting.

After that, with a blank look I saw the caption on the book writes,

Oh, Islamic. Just like that I thought it was very good but didn't have feelings to read it.

Useless me, because I was in my happy days I never thought that I would need any sort of thing like that.

The days gone by to months, I guess the fate stepped in that I have felt the most miserable days in my life of growing up. My heart broke, my days fell apart, I have no sickness but my health gives me thought that I'm dying. I've got skinnier to the bone day by day. It felt so suffering living like that. Lying on the bed uselessly. Falling like you don't even know how to get up, and where to begin.

Allah tested me again and again. Alhamdulillah during those times, I still managed to remember Him, I still realized that I should not give up yet. The tears I shed everyday for over half a year have made me closer to Him. The pain I felt got me the feeling that I want to be reborn again, which means :

"I want to feel alive, again".

The path was blurred in the beginning. As I was searching my way of being a better person as a servant of Allah. The first thing that got me worried is the questions like :

"How if Allah not accept me? How if I return to be the bad servant again? That I will forget Him again? Then my repentance would be useless. It would be worst"


But then I was determined to start at least with changing my appearance of wearing hijab and more proper clothes for a muslimah. I started to mingle again with society and joined a program of 'Bakti Siswa' (BAKSIS) of my residential college in Kampung Sawah Sempadan, Tanjung Karang. It was February in 2012.

That is how I met again with this book when my friend, Atiqah brought it to the program with the same intention like Suhaila. After all that while, just then my heart was opened to flip the pages in between the covers of the book. That novel really gave me a good first impressions and I bought it for myself as soon after I got home in Sepang.

The story is around the year of 2004. I guess the novel is based on true story.

As I was in the first chapter, it was like so cool, that Hlovate describing the characters of Fend (Affendy), Ku Kamaruzzaman (K2), and the other friends living as a life of a LIM KOK WING's student. I believe most of young peoples nowadays are dreaming to have their kind of lifestyle.

The lifestyle of freedom with the talents on arts. The lifestyle that you are free on how you want to express yourself along with.

Musics. Paintings. Drawings. Photography. Together with the gadgets and all the hot stuffs.

I told you, they really are soo cool. As a girl, it would seems like you want to fall in love with one of them, he he he.  Okay stop =.= it just physically.


Then I found that the most interesting part in this novel is the beautiful quotes written at the end of every chapter. That is how I learned from this book.

Fend and K2 are friends. They are good students, live well on their own and communicate well with others too. But they were just enjoying the living of being young. They never thought that their souls needs more than what their lifestyle practices.

The first story about Fend shows how he get the first sign from Allah by knowing a girl named Amalia. He got attracted to the girl and tried to get closer. As he getting to know her, he was amazed that she had the same interest like him which is the underground music.

But later, he realized that even she had such a cool taste in music, it is not important anymore to that girl, and she said, "banyak benda lain yang boleh diikut". Fend  got puzzled the way she said that. All she got from her then was a CD titled 'The Eleventh Hour'.

As he got the CD, he never get interested to watch what is contained in the CD until he lose it without realizing. After months then, one day he found back the CD coincidentally while he was tidying his belonging in the locker. Only then he has the urge to watch the contains of 'The Eleventh Hour'..

That was how his story started, and that was when my doubts got cleared. By the phrase :

"The man who decided to change his life on the twelth hour dies on the eleventh". 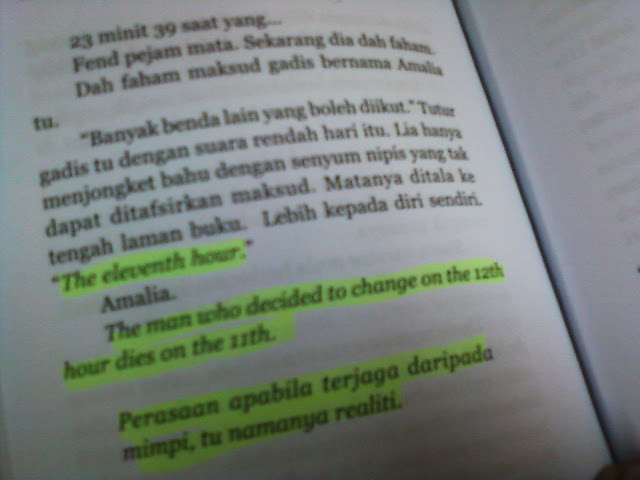 As he was still got blurred by all of the meaning of life, the story of Fend continued when he got traveled with his cousin, Chad in Australia. There were a lot of things that he learned there that thought me too. Until the 'lights' come to K2, it was all a very meaningful story in every words.

I feel the story of the novel is very close to me, I guess it is the same with all of peoples out there too. This is the first book that opened my heart to gain other knowledge that I should treasure in this world.

The Meaning of Life.

There are too much that I learned by this novel. It just too much. Too much to write it too.. Hu Hu.

Because its include the quotes of Hadith and Qur'an too.


Some of peoples out there might have known it, the life.

But some are not.
I guess you'll know just when you learned and read it. The Meaning of Life.